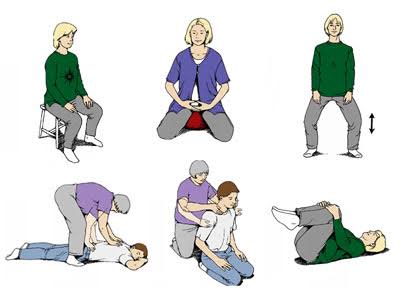 The aim of this study was to compare the effects of Basic Body Awareness Therapy (BBAT) and conventional therapies (CT) on pain, balance and proprioceptive sensation of cervical region in patients with chronic neck pain.

As a cross-over study, patients were divided into A (n=17) and B (n=18) groups. BBAT program has been implemented to patients within group A two days a week for 6 weeks while group B received the CT program during the same period. After the interval of 5-week, group A was treated with CT and group B was treated with BBAT. Pain severity with; Visual Analogue Scale (VAS), disability level with; Neck Disability Index (NDI), quality of life with; Short Form -36 (SF 36), fear of movement with; Tampa Kinesiophobia Scale (TKS), joint range of motion (ROM) with; Cervical Range of Motion Deluxe (CROM) device, head repositioning test with; CROM, balance with, Computerized Dynamic Posturography, functional balance with; Single Leg Standing Test (SLST) were evaluated.

When intra-group treatments results were compared, active flexion, right-left lateral flexion and left rotation were higher in group A after BBAT (p<0.05). There were differences in left lateral flexion in favor of BBAT, in extension and right rotation in favor of CT in group A and in right rotation in favor of BBAT in group B in passive ROM values after intra-group treatments. BBAT was found to be more effective in reducing angular errors with the sagittal plane in group A and with transverse plane in group B than CT (p<0.05). After BBAT in group A, there was a significant increase in Sensory Organization Test (SOT) position 4,5,6 and composite score results, whereas in group B starting with CT, there was only a significant increase in position 5 score (p<0.05). Left movement velocity, left end point excursion and left maximum excursion values were higher in group B after BBAT (p<0.05). When the results were compared in group B, the results of SLST which was get on the right side with closed eyes were significantly different in favor of BBAT (p=0.011).

BBAT is more effective on activity pain, active ROM, proprioceptive sensation, and balance than CT. Aiming to establish correct body alignment and mechanics by improving physical consciousness BBAT is a good alternative method for physiotherapists in the treatment of musculoskeletal problems.

– Study made by Kamil Yılmaz